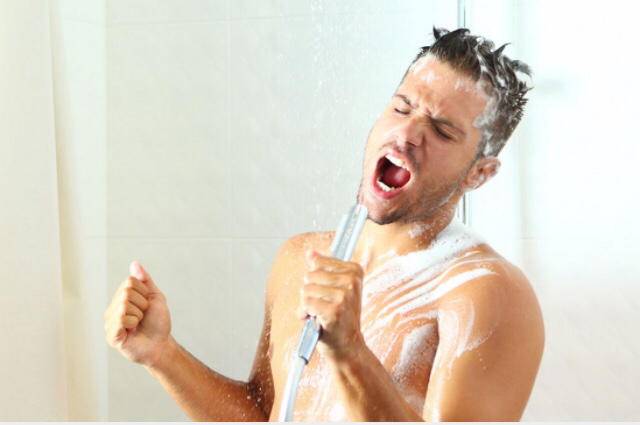 Sing In Your Shower Voice!! @therealwil.com

There you are dressed and being escorted from your backstage dressing room. Bodyguards have surrounded you on every side. As soon as you walk out, you can hear the roar of the crowd and feel the awesome energy in the air. Fans align the hallway, to get a glimpse of you before you walk out on stage. The master of ceremony and the opening acts have set the atmosphere. The crowd has patiently waited in anticipation for your performance all night. The time is now!!! They are cheering and chanting your name!! You can feel it in your soul!! Your adrenaline is pumping and your heart is racing. They say your name, the auditorium lights go up, and the crowd goes bonkers. You whisper a brief prayer, and mount the stage like the world famous super rock star that you are. It’s all or nothing and you have come to offer nothing less than a stellar performance. Really?

In reality, your dressing room is your bedroom. Your house robe and shower cap are the ensemble for the show. Your backstage fan filled escort in actuality, is just another solo trip to the shower. The high tech recording studio is really your bathroom, and the booth is actually your bathtub equipped with a sliding shower curtain. Inside the booth(tub) are all the tools necessary to perform your concert this morning just before work. You moonlight at your job, but selling out arenas is what you do on the real.

Nevertheless, SING IN YOUR SHOWER VOICE!!

Some perform with a track and some belt it out a cappella. A shower head with streaming jets, pump hot water down upon your temple of transparency. You are ready to rock. “Bass up the track,” is what you shout to the sound man in your mind. The roaring crowd is really the water sprinkling down into the tub. The echo in the bathroom sounds like reverb set in the speakers of the studio by the engineer. Nevertheless, SING IN YOUR SHOWER VOICE!!

There is only room for one in the booth. There is no such thing as naked harmony. No frills, no thrills, just the artist in their purest form, a mic, and one voice. The curtain is draw and the concert begins. Some people have no idea what can happen when soap, a singer, and a song come together. Nevertheless, SING IN YOUR SHOWER VOICE!!

Without a recording contract, manager, or record executives present, we put down breath taking lyrics and redo the songs of our favorite artist in our own voices. Nevertheless, SING IN YOUR SHOWER VOICE!!

Most of us never rock our performance sitting down in a tub, but the shower is where our greatest performances go down. Not Carnegie Hall, the Shine Auditorium, or the Apollo, but the SHOWER is where the magic happens.

I am willing to bet that Shower Singers are happier people, and live longer lives. People who sing in the shower, also sing themselves happy. Shower singers set the tone for their own day and melodically serenade success to come for themselves. Shower Singers are confident people. They are at peace with what God has blessed them with and they use it. Insecurity, fear, and jealousy have no place in the Shower Singer’s life.

So to you my loofah love song singers, my soap bar balladeers, and my wash rag rappers,

I say to you, SING IN YOUR SHOWER VOICE!!

WARNING: Everybody will not appreciate your great sound and vocal range. Don’t be alarmed, they are simply hating!! Nevertheless, keep on SINGING IN YOUR SHOWER VOICE!!

He who cannot sing in the shower cannot conquer the world!!