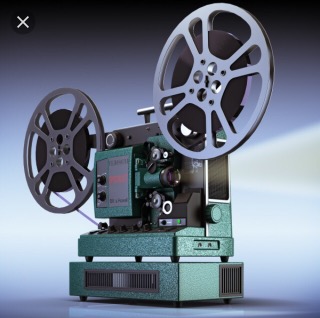 Say Cheese, You are on Candid Camera!!

The life you live is actually captured footage on the reel of today to be played on the projector of tomorrow!!
Some how my mind goes back to school days. The best days as a child seemed to be the days that we were scheduled to watch a movie in school. How excited we were to walk in class and see that big projector with the film reel, set up with the white projector screen pulled down. I’m not sure if we were more exited about the movie or the fact that the lights were about to be turned off.

As if it were just yesterday, I can see the film on the big reel being fed through the projector. The anticipation and fascination of knowing that as it passed before the bright white light in the projector, that it would somehow cast an image on the wall for all to see and hear. In this life we are the film. The projector is life. God’s bright light passes through us and it is displayed upon the world screen for all to see.

As a child, My father owned a small 8mm camera and projector. He would film all of the special days. Every vacation trip, the Bahamas, Jamaica, Hawaii, and all annual holidays were all captured on these little reels. The only difference between dad’s movies and the movies at school, were Dad’s had NO SOUND.

It’s funny how even without sound and just visual, how much you can see, understand and enjoy. We could see the look of happiness and joy, the palm trees on the island, the boarding of the plane, and of course the weird clothing fashions of yesterday. We couldn’t hear it but we could see, and remember the old house furniture, the Easter outfits, and the toys at Christmas.

It dawned on me what is truly missing today. We have left reel to reel footage, saved in time, to real time video clips, that can be deleted with a push of a button. From filmed family celebrations of laugher and love, to selfish selfies of ranting and raving.

One day, I watched a sad movie on television. It was about a woman who in years past was the biggest and brightest hollywood star in film. Somehow years had past and her career had come to a washed up end. Everybody knew it but her. She went from A-lister to no list. She went from the life of all the parties, to no invitations at all. Instead of accepting the reality of life changing and evolving, She decided to stay within the confines of her old but paid for mansion. She spent her every waking hour dressed in her glamorous gowns of the past. She sat and watched over and over the world famous black and white movies of her hay day. She was the star then and still believed that nothing had changed. She purposely closed out the whole world to ensure that it wouldn’t change.

In fact, the world has changed. The values and morals of how most of us were raised are consider old fashioned and dated now. It almost makes us feel as though we would rather spend the rest of our days hiding in a dark film room viewing OLD BLACK AND WHITES, 8mm footage with No sound, or the huge reels on the OLD SCHOOL PROJECTOR. It would remind us of HOW THINGS USE TO BE!!

One day my parents moved from Indiana to California after 40 or more years. I can’t tell you how much stuff had accumulated over the years. As we were packing, I came across a bag of the old 8mm home movies. He sad part was I had nowhere to play them. The old projectors of yesterday have disappeared and are obsolete now. Great footage of memories but no where to play it. The new stuff can be projected on walls in bright day light, based on the amount of lumens. The old stuff would show and lit up well in the dark, even without sound. It was based upon LOVE not LUMENS. Just like photo albums, when we pull the out to show the younger generations, they declare we have bored them out of their mind. So we keep the footage of the good old days locked up in hopes of being about to view it and share it. I am so glad GOD gives all of us hearts as projectors and MEMORY as saved FOOTAGE OF YESTERDAY. The good part is we can actually play it whenever we feel like it in our minds!!

Now, when I want to play to movies of my memories, I remember that lady in that dark film room. She no longer needed a crowd. I now know, an audience of one will do just fine.

And just like watching those reel to reel films on the old school projector, the film starts but we watch it come to an end and fade to a white screen. Our lives must also come to an end. No movie or life last forever.

As long as we are living, footage is being filmed on God’s camera. Let’s do the best we can to LEAVE A LEGACY of great footage for others to view when we have long left this earth.

When this world frustrates me and seems to operate without any morals and values of my upbringing, I disappear into that old dark film room where my Old School memories play all day and night.

Say cheese, you are on Candid Camera!!