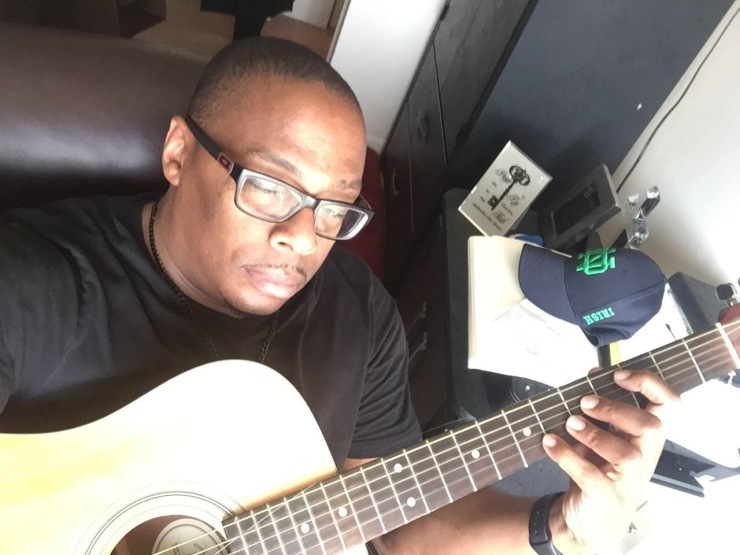 I am on Caregiver duty today. Angelo is resting in the living room. I am in my room thinking about what can I do with this free time available. Every now and then, the Caregiver has some time, but it comes in spurts. Unscheduled and unannounced, it’s comes when it comes and you have to take advantage of it. Caring for a loved one is somewhat like caring for a baby. It’s best to sleep when they are sleeping, and work while they are woke. If and when you get it, it should be valued and used wisely.
I reach over and pick up my guitar. It’s a six string Fender with one broken, compliments of my grand daughter. It’s funny how things can remain intact and unbroken until grandchildren come to visit. In my mother’s words, “That guitar wasn’t bothering nobody until you came over her bothering it.” It has a light coat of dust that has settled upon it as a result of inactivity. I’m thinking to my self, “The old banjo ain’t be strummed in a minute.”

My goodness!! The wood, the neck, the body, and the strings feel so good to me, as I position the ax in my lap. It brings back to my mind one great reality, I never learned how to play it. I mean it looks good, it feels good, we even look good together, but I never took the time and made the sacrifice to learn how to play it.

Now don’t get me wrong, I have the desire to play it, but not the time or discipline. If one is going to play well, desire and discipline must at least call each other on the phone from time to time.

I have friends that play. Jon, Terry, and Pix play, and they are musical geniuses with it. I bought one because I wanted to play too.

A great thought just interrupted my thinking process just now. Maybe the reason why it’s called an Instrument is because, it’s a vessel, a tool, a means by which something is done. An instrument is used then to transport the real music in one’s heart out into the universe for others to hear and enjoy. It’s a vehicle!! The real music is not in the instrument, and they don’t make music by themselves. It’s in the heart and mind of the musician. The instrument is really the transportation.

I am staring at my instrument and the mere potential of what could happen has got me giggling with expectation. The matching of the sound in my head with the correct positioning of my fingers and these strings, motivate me. I want to play. I want to make it sound like I want it to sound. In all honesty, I really want to make this axe sing like the Legends do!!

You ever wished you could just pick up an instrument and play without practice? Don’t!! It’s not possible!! You have to pay some dues!! Your soul is required of thee!! I’m just joking, I think.

I will never forget the day I went to buy her. The salesman said, “Are you interested in buying that guitar?” I said, “Yes sir I am.” He replied, “Do you have a girlfriend?” “Yes sir I do,” I declared. He said, ” If I were you, I would break up with her now!” Why? I questioned. With a straight face he responded, “Your girl is going to get jealous and leave you.” He explained that, the time required to master this guitar will ultimately force your girlfriend to first compete for attention, but finally leave you. I bought the guitar anyway. I am sitting here with no girl and a guitar with a broken string. Ain’t life a kick in the head.

I walked away with at least a clear understanding, that whatever you want to do well at, you have to spend hours upon hours perfecting it.

I also recognize the sacrifice in learning the guitar. The experienced will tell you about callouses that must me built up on your fingertips. This process can be painful as well. Maybe I should have titled this blog, “Reasons why I own a guitar but can’t play it.”

Again, I admit this guitar is pretty and it feels good to the touch. We look good in pictures together. It reminds me of some people. Some people are just satisfied just looking to part. They like dressing for the game but never playing in the game. They live for the vote and applaud of public opinion. A relative of mine, who shall remain anonymous, use to walk around the house with an electric guitar strapped around his neck and a pick in hand. He would walk around the house strumming that thing like he was Eddie Van Halen!! One day I asked him, Can you really play that thing? I never see you hooked up to an amp or electricity? He said, No, I don’t know how to play, I just love guitars. I thought that was stupid, until I purchased my own. At least I don’t walk around with mine strapped around my neck, doing fake solo’s and stage dives off of my mother’s couch.

In all honesty, I did at least make up a few songs with lyrics. These songs may never make the National Music Awards show, but I am satisfied knowing that I at least learned something.

Without much time left in life, I recognize that the guitar is not my weapon of choice to put food on the table, nor is the basketball, the spatula,the wrench, or the chainsaw. I have figured out that I might have a chance with this pen.

You may laugh when you think about me and my cousin, Eddie Van Stage Diver, but there is someone walking around with an ink pen but can’t do what I can do with it!!

Here is my recommendation,

“Find your instrument and make music!!”