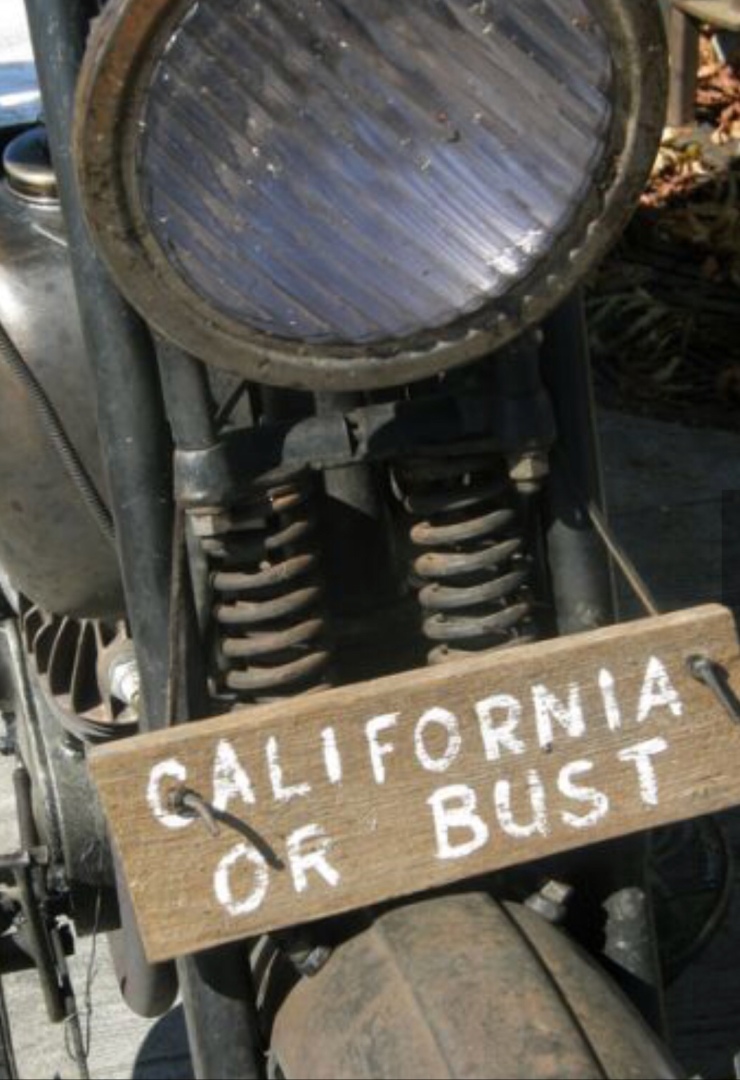 My good friend and I were talking yesterday and the age old adage, “California or bust,”came up in the conversation. It sparked a desire in me to do a little background research of where this statement came from. What I found was an ever greater inspiration for an answer for my personal life. I though I’d share it with you today. As it challenged me, I thought I’d share the wealth and challenge you as well. Let’s see!!

Where did California or bust” come from and what does it mean?

In history, The Great Plains of the U.S. were struck, in the 1930’s, with two catastrophes: drought and the Great Depression. Many dirt farmers were left with no dirt, just dust and debt while the wind storms destroyed their farms. In desperation, some of them headed west on Route 66 towards what they hoped would be greener pastures in California, the “Golden State”. Some of them had signs “California or bust” on their shabby jalopies and trucks, loaded with their families and few possessions. It was do or die for them. They could no longer remain where they were. They had to make a change so they headed for California or bust.

As for “bust,” I suppose they meant they were going to bust their guts trying, and failure would not be an option.

A few things that jump out at me are:

1. They were unhappy and uncomfortable in their present situation.

2. They had a clear destination, California.

3. They answered their WHY. They wanted a better life for themselves and their family.

The famous rapper Fifty Cent recorded an album and movie entitled,”Get Rich or Die Trying.” His quest and clear goal was to get rich. He wasn’t happy in his present situation. He was willing to die trying to change it. His motivation seemed to be a personal commitment to never struggle or be poor again.

What do your want? What do you want so bad that you are willing to die trying to achieve it or obtain it?

I love mantras and statements of purpose like these because they help me clarify what a truly want in life and why.

Maybe California is not your destination or getting rich your desire. One thing for sure is, you should want something, want to be somewhere or become something.

The other piece to the puzzle is to be willing to die going for it. I don’t know where it came from, but I have a real desire to live a spectacular life. I haven’t quite defined the vision In technicolor clarity, but I’m at least heading west.

A normal question among travelers of yesterday and today still is being exchanged after hello and howdy in greetings. Rather it be on horseback or in airports everywhere, the question is asked, “Where are you on your way to?”

I’d like to ask you, “What does the sign say hanging in your heart and on your mind?

Is it California or bust, Degree or bust, Success or bust, Happiness or bust? Whatever or wherever it is, you have to have an “OR BUST!!”

“Headed to Success but If not my plan B is to get a job that I hate?” That’s too big of a sign to carry.

They headed west on Route sixty-six with a sign on display for all to see,

Hey you, “Howdy partner, where you headed? What does your sign say? You just joy riding? You chilling?

You wonder why people seem to not want to be bothered with you? People with a “Blank or Bust” mentality waste no time with your type. They can’t afford risking their goals and destination messing around with you. Get your sign together.

This challenge is to me first and then to whomever it resonates with!!