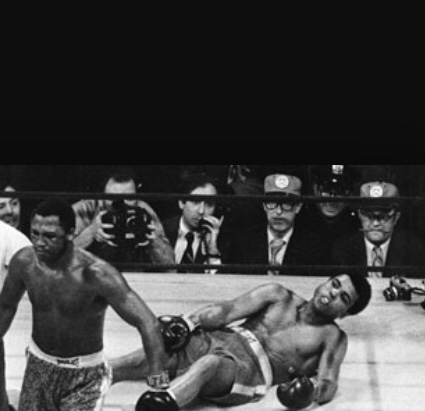 A picture is worth a thousand words. In 1971, Frazier outslugged his nemesis in a 15-round decision, a fight at Madison Square Garden aptly hyped as the “Fight of the Century.” At the end of round 14 Frazier held a lead on all three scorecards (by scores of 7–6–1, 10–4, and 8–6). Early in round 15, Frazier landed a spectacular left hook that PUT ALI ON HIS BACK. With his jaw swollen grotesquely, Ali got up from the blow quickly, and managed to stay on his feet for the rest of the round despite several terrific blows from Frazier. A few minutes later the judges made it official: Frazier had retained the title with a unanimous decision, DEALING ALI HIS FIRST PROFESSIONAL LOSS.
Looking at this picture and glancing at the spectators and reporters, I want to offer you a few reasons why you should get up quickly when you are KNOCKED DOWN.
I looked at this picture and saw something that I want to share with you. (From left to right appearing in the picture)

Spectator #1- People will take pictures of your knockdown and post it on Facebook for the world to see.

Spectator #2- People will get on the phone and call everybody they know. The will broadcast to the world your worst moment.

Spectator #4- (the cop in the pic) Some people will celebrate your downfall. They wait, dream, hope and pray for it. The BEST day of their life is the WORST day of your life.

Spectator #5- Some people not only wish and pray for your downfall, but they also hope you STAY DOWN. He looks as if he is hoping ALI would quit and stay down.

Spectator #6 – Joe Frazier is walking away with the look of victory on his face.  His victory is short lived.  KNOCKED DOWN AND KNOCKED OUT are two different things!!!

The ONLY REAL REASON you should get up quickly from a knockdown is……..

YOU KNOW YOU ARE THE HEAVY WEIGHT CHAMPION OF THE WORLD!!!!

ALI went on to regain the Title and to become what he knew he was, ” THE GREATEST”

JESUS got up so YOU could get up!!